Does a cup of tea really help when you feel stressed? 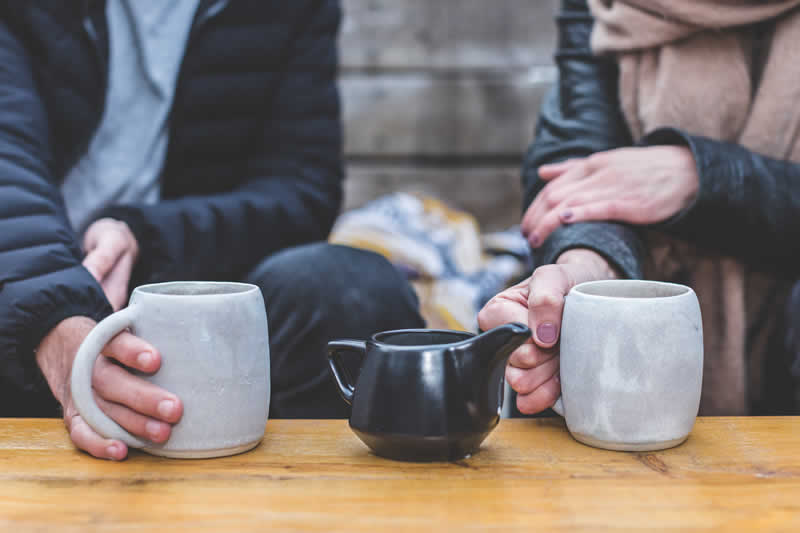 There was an excellent article by Patricia Churchland entitled “Why do we care?” in New Scientist, which explained the benefits of mammals evolving altruism and a sense of morality.

The writer referred to the role of oxytocin which “triggers the discharge of neurocannabinoids – cannabis-like molecules that make us feel good”. Oxytocin is released in mothers during suckling and cuddling, but also during sex in monogamous mammals.

Interestingly is also released “during food sharing amongst friends – maybe even sharing a cup of tea”.

This got me thinking. I already knew that stroking your pet stimulated oxytocin, and that increasing oxytocin was a good way to combat the effects of stress. So, I decided to see what was out there about oxytocin and its impact on cortisol and stress.

I was amazed to see that oxytocin reduces alcohol craving, food intake and the number of cigarettes smoked by smokers. Interestingly many of us rely on alcohol or cigarettes or food (or all three) to get us through times of stress but, are they the best way to reduce cortisol?

In fact, cortisol has been shown to be higher in smokers and it interacts with the brain’s reward system to increase habit formation. Perhaps increasing our oxytocin levels would be better and more healthy way to reduce cortisol.

Alley and others (2019) looked at the interaction between cortisol and oxytocin in women. They found that women who had a greater increase in oxytocin in response to a stress task, had a more rapid fall in cortisol in the recovery period. Heinrichs and others (2003) showed that, in a group of men, the combination of intranasal oxytocin and social support resulted in the lowest cortisol levels and increased calmness and lowered anxiety during stress. These studies show that oxytocin can support us both during and after stressors.

Rather than take medicinal oxytocin, are there ways we could naturally increase our oxytocin levels?

Food sharing also reduced testosterone levels amongst the males which is known to encourage nurturing behaviours. The effects were seen in all chimps regardless of whether they were the giver or the receiver of the food, whether they were kin or non-kin and whether there was an established bond or not.

For me this is incredible. Could we use our evolutionary past to help us cope with present day stressors? Could food sharing help increase our oxytocin and help us to combat stress?

We know that stress is an increasing problem for many people but particularly members of the veterinary profession. There has been a lot of discussion in the veterinary press as to why levels of stress and disillusionment have become so high in recent years, with blame being placed on workload, client expectations and even the types of people entering the profession.

There are many ongoing programs designed to intervene to reduce stress and overwhelm, and to attempt to reduce the numbers of suicides within the profession. Many of us are wondering what has changed to make this problem so dramatic.

Does our increasingly urban indoor society have an effect? Hunter and others (2019) prescribed a “nature pill” to 36 urban women and men and found that 20-30 minutes spent outdoors strolling or sitting in place that makes you feel in contact with nature reduced their stress hormones (cortisol and amylase).

What has changed for us as a society – do we spend too little time outside connected with nature?

Do we rely on social media to provide us with social interaction after a stressful situation when in fact it may delay or impair our recovery from stress? Could we benefit from food sharing and the social interaction that accompanies this? Could we become more aware of the behaviours that promote oxytocin release and use them to increase our ability to combat stress?

What I have learnt is that we all need to make sure that we spend time outdoors in nature every day. We need to eat together and make the time for the social interaction that comes with that. We can still use social media, but it cannot compensate for face to face social interactions.

A simple way to do this might be to encourage people to eat together at lunch time and tea breaks, to allow staff enough time to get outdoors during the day when it’s light (which is always a challenge during the winter months).

I am also now more aware that when I am feeling stressed the last thing I should do is pick up my phone and start looking at social media, perhaps what I need is a hug and a cup of tea with a friend or colleague and failing that some quality time stroking a pet might do the trick!

"I’ve so valued this experience with Clare. She has supported me to grow, feel more trusting and confident in myself. I can see the woods for the trees, the importance of my vision and mission over and above the limiting beliefs and stuff, literal and metaphorical, that keep me pinned down in supposed safety!

I’m braver, calmer, more patient, focused and grateful than before."